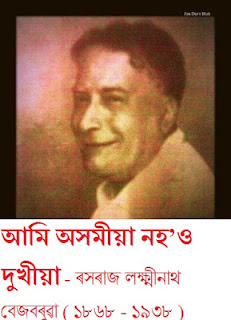 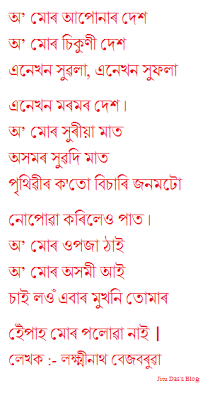 This is the great anthem of Assam, written by a great enthusiastic writer of Assam, his name is Laxminath Bezbarua. He was born in the November month of 1868,

He writes in his autobiography "Mor Jiban Sowaran" (মোৰ জীৱন সোঁৱৰণ), that he was born in an autumn night, it was Laxmi puja( fool moon).
Lakshminath Bezbarua was born on a boat, as it stood moored in a sandbank of the river Brahmaputra at Ahatguri, near Nagaon on a Lakshmi Purnima night, in November 1868. His father Dinanath Bezbarua, a senior official with the British government, was in the process of moving to Barpeta due to official transfer.
Lakshminath Bezburua spent his childhood in different places of the Assam. His father brought his family with him from Barpeta to Tezpur. From Tezpur, they shifted to North Lakhimpur. In between the family stayed for a brief while at Garchati and finally, they settled in Sibsagar.

Lakshminath Bezburua started his early in education Sibsagar Govt. High School at Sibsagar. Then, he graduated from the City College in Calcutta. Thereafter, he took his M.A. and B.L. degrees from Calcutta University.
He presided over the 7th annual session of Assam Sahitya Sabha held at Guwahati in 1924

Laxminath Bezbarua is called as a" Rasaraj"( which means, king of humor), because he was a great humorer, he wrote his Humor writing as a "Kripabari Barua", with this pseudo name he expressed his griefs for the Assamese society with a funny story.
Laxminth Bezbarua is also known as Sahityarathi( "Charioteer of Literature")
Because of his great talent to touch every field of literature with such beauty.He wrote, poems, short stories, stories, novels, humor, translation of folk tales, such a great way, that, only a few could. Atul Chandra Hazarika is also a great translator.

Laxminth Bezbarua was a great writer because he started a revolution of Assamese Language. He was an optimist.Thats why wrote, We are Assamese, we won't be poor. He was a passionate writer, and an honest one too.

He died in Dibrugarh on March 26 at the age of seventy only a few months after he went back to live in Assam permanently. The Asom Sahitya Sabha annually observes this day Sahitya Divas


Oh motherland of mine and yours

Such sweetness, such fruitful

You can search the world

in your life, you won't find it.

Oh my place of birth

Let me see your face one more time

My longing has not end.