What matters to soul quotes by Jitu Das quotes 2017 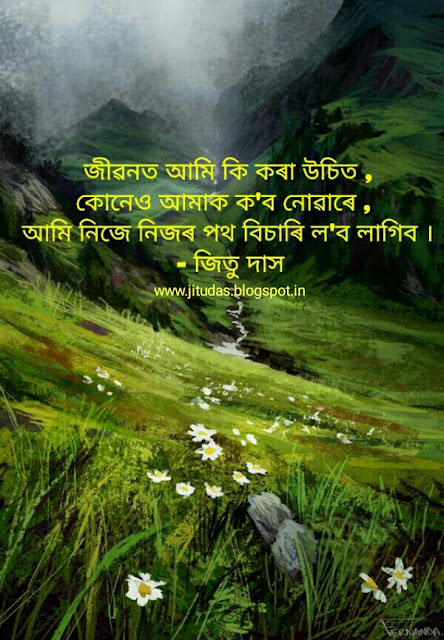 
Traveling to Manas National Park has been always one of my dreams, and at last  this year  in the month of December I got the opportunity after completing my Post graduation in Zoology from Gauhati University. Manas is a unique world heritage site, it lies in the foothills of Bhutan on the Eastern coast of Himalayas, at coordinates 26.7460° N, 91.0203° E. and Manas harbor’s a great biodiversity including 60 species of mammals, 350 birds, 42 reptiles, and  7 amphibians, 54 fishes and more than 100 insects. Out of these wildlife, 21 mammals are India’s Schedule I mammals and 31of them are threatened. There are about 543 species plants recorded. But tourist may complain that they could sight as much as animals like Kaziranga, which is because of   the low population density of Manas. It is because Manas Biosphere Reserve extends oven an huge  area  of 2837 sq. Km from the river Sankosh in the west and Dhansiri in the east, with an core area of 500 sq. Km of the Manas National Park connecting with Royal Manas Park of Bhutan and it is a great feeling to say that Manas has more biodiversity than any National park in India. Manas is  the only park in India with five conservation status. There are currently more than six local and international NGO working for the conservation of Manas, with translocation of One Rhinoceros to Manas, which was put into local extinction by rise militant in the Manas. After the 14 years of destruction, militants have joined with NGOs and government to work for conservation.

In the  sanctuary  there are 60 species of mammals, 350 birds, 42 reptiles, and  7 amphibians, 54 fishes and more than 100 insects. Out of these wildlife, 21 mammals are India’s Schedule I mammals and 31of them are threatened. There are about 543 species plants recorded. But tourist may complain that they could sight as much as animals like Kaziranga, which is because of   the low population density of Manas. It is because Manas Biosphere Reserve extends oven an huge  area  of 2837 sq. Km from the river Sankosh in the west and Dhansiri in the east, with an core area of 500 sq. Km of the Manas National Park and it is a great feeling to say that Manas has more biodiversity than any National park in India. According to our Tourist guide, the sighting of animals in the  month of December is less, because of the rush of tourist, but in the month the sighting of animal is much more.

The fauna of the sanctuary include Indian elephants, Indian rhinoceros, gaurs, Asian water buffaloes, barasingha, Indian tigers, Indian leopards, clouded leopards, Asian golden cats, dholes,capped langurs, golden langurs, Assamese macaques, slow loris, hoolock gibbons, smooth-coated otters, sloth bears, barking deers, hog deers, black panthers, sambar deers and chitals. In our journey we were able to see the rarest golden langurs near Mathanguri at the  Indo-Bhutan region. We were also lucky to see elephants in the greassland, buffalo and boars which made our journey amazing. Seeing these wild animals in their habitat , it  made me think about the need of conservation of the animal habitat even more. Manas is known as the one of the biggest tiger reserve forest in the world, and it is not easy to spot a tiger. We were not lucky to see a tiger, because it takes time. But we could see some deers in the forest and it was wonderful. Manas is also known for the endangered pygmy hogs, which are very hard to see. They are always in hiding, it takes great amount of time to see them .  One of the things I noticed in the forest is the man-made wild-fire, and I could see smokes rising from more than 3 to 4 locations around in the grassland region, where the animals graze, it is also the region, where we spotted two Peacocks searching for food in the afternoon. My uncle said these fires are made by poachers, so they could easily hunt animals.
The park is well known for species of rare and endangered wildlife that are not found anywhere else in the world like the Assam roofed turtle, hispid hare, golden langur and pygmy hog. There are also pythons available in the forest, but we did not see them. We also sighted capped langurs in Mathanguri range.

The Manas hosts more than 350 species of birds, out of which 26 species are globally threatened.  It has the largest population of the endangered Bengal florican to be found anywhere and used to be sold in markets of Kokilabari, another range of Manas. In our travel, we were lucky enough see some birds such the peacocks, Parakeets, eagle and  kites.

Conservation is the most important goal of any National parks, sanctuaries. Manas National Park is one of the most important world heritage site in the world, that harbors a great number of Animals and plants, many of them are medicinal plants. The main enemy that threats the Manas National park was always been poaching. The long violence in region has killed Rhinoceros into local extinction. in the that started in and around the landscape In the late 1980 politico-ethnic disturbance started by the Bodo community demanding greater political rights and powers. The violence that  followed caused large-scale damage to Manas, with the habitat, wildlife, and management and protection activities suffering immensely. It also led to the local extinction of the great Indian one horned rhino (Rhinoceros unicornis) and the swamp deer (Cervus duvauceli  rangitsinhi). But in recent last 5 years, rhinos from Kaziranga are being established here. Translocation under the aegis of the  Indian Rhino Vision 2020 ( IRV- 2020) since 2006, with support of Govt. of Assam in collaboration with Wildlife Trust of Indai (WTI), Bodoland Territorial Council, WWF-India, International Rhino Foundation and US  Fish and Wildlife Service.In 2016, now, there are 32 plus One horned Rhinoceros and  last year it was 27. In recent 2013-14, WTI has started translocation of Swamp deers. Currently several organizations, including the World Wide Fund for Nature (WWF-India programme), Aaranyak and ATREE/ UNESCO are collaborating to provide technical support to the government’s efforts at scientifically estimating the wildlife/tiger population in Manas. The NGO Aaranyak has projects on livelihood inhibition, tiger, wild-dog , Bengal Florican. ATREE has also livelihood programs going to help people get an alternative way of income other than poaching in the forest. The high amounts of efforts of conservationist, NGO and government and good will of BTAD political leaders. The current Forest minister of Assam  Pramila Rani Brahma who is  also very active in conservation. Now the people are also changing their perspectives towards Manas, many young people are getting involved. The most positive aspect of Manas in current situation is that the militants that used to kill the animals are now protecting them and working with NGO and governments. That is surely boost the tourism, as there is no more militants to fear in the Manas and it makes me feel like a change is coming, foreign tourist numbers are increasing,  I myself met two groups of foreigners from Australia. Discovery had also made a documentary  about Manas this year named “Manas, Return of the Giants”, and there is also documentary named “ Sky river of the Himalays’’ in making, where I had the great the opportunity to interact with the director. All these positive steps makes me proud to live nearby Manas. But well known  N.G.O such as Aaranyak and ATREE is giving trainings to people in nearby villages about the need of conservation of forests and animals. . This year the Aaranyak manager Dr. Bibhuti Lahkar was awarded the UNESCO World Heritage hero award for his great effort in conservation of Manas National Park for 20 years or so. He became the first person in Asia win such as a award who  inspired me  a great deal to work in conservation even more now. So, the passion grew stronger in me and in my college I found more students interested in conservation. So, we decided to create a N.G.O. about conservation, we named the N.G.O as JIBAKUL( Sanctuary for life ) and now it has been registered.

Manas takes its name from the Hindu Goddess Manasa. The forests of the Reserve were traditionally inhabited and their resources used mainly by Bodo and Adhivasi tribesmen, though the area was also preserved as royal hunting grounds for two royal families. There are about 60  villages or more  with 28,800 inhabitants live on the fringe of the National Park, predominantly Assamese, Bodo, Tea-tribe, Nepalese, Bengali  people.  The paddy culture is most important source of income for the people of fringe village . As people of 5 ethnicity live in the region, there are sometimes misunderstanding and fights among the tribes, but it is now mostly peaceful all around the area. People of Bansbari range has got into tourism now more than ever. The people are developing even more now, because there are many local NGO groups that are bringing the inspiration towards the development, such as MEWS( Manas Ever Welfare Society) , MMES( Manas Maozigendri Ecotourism Eco-tourism Societies are developing tourism sides. One of the major thing of 2016 is the developing of the Indo-Bhutan road through Manas, which is mostly complete very much boost the prospect of tourism. Most  people of fringe area of Manas speaks Assamese. The people of the area celebrates a great many festival all around the area. Most celebrated festival is Bihu in three season, Kati Bihu in the autumn, Magh Bihu in Winter and Bohag bihu in Summer. Bodo people also celebrate bihu, along with 16 Kunthia Bathow puja, 18 Khunthia Bathow puja. The other festival is Durga puja, celebrated by all people. Most tea tribes are involved in tea garden, some people are involved in tourism  and work as teacher. They have a dance called Jhumur dance, which is a very beautiful group dance. Such as the people of Manas, working towards a greater future, but the fast pacing modern world is hard to keep up with. Still a lot of development is necessary, mostly  conservation and environmental education that would teach them the importance of Manas and how much rare biodiversity it harbors. From the latest report of 2016, it says that the number of visitor has increased. Because the roads connected to Manas are in a much better  than ever before, it is very easy to visit Manas. The number of resort and lodge are increasing day by the day to sustain huge number of tourists. There are  about 9 resort and lodge in the Bansbari range, which is the most developed range among all three range, Bansbari, Bhuyanpara and Kokilabari. There are  accommodations such Bunglow  in Mathanguri, if one wish to stay for the night. We stayed  night in the Mathanguri Bunglow and we saw the buffaloes in the morning and eagles and the spectacular view of the Bhutan Hills, where the Royal Manas National park that covers an huge area 1057 sqkm.

The travel to Manas National Park provides ample scope for gathering knowledge relationship to Conservation and towards field. Conservation of biodiversity in ex situ is important task for everyone otherwise we have to observe all biodiversity in Zoos only. My experience in Manas is the most wonderful journey of my life. I welcome everyone to visit Manas just for once, it’s a sanctuary for life, a safe haven for animals in the most realest sense.
- February 06, 2017 No comments: